Now in its eighteenth year, EnergyPoint’s annual benchmark survey remains the industry standard for independent customer satisfaction ratings and rankings of global contract drillers. The survey is part of a portfolio of annual studies conducted by EnergyPoint. This year’s study, which concluded on December 31, 2021, includes ratings data on one of the most comprehensive sets of contract drillers in the survey’s history.

Doug Sheridan, managing director and founder of EnergyPoint, notes, “With ongoing labor and oilfield equipment shortages, today’s contract drillers face some of the most operationally challenging circumstances in years. Despite these conditions, both land and offshore contractors have—quite surprisingly—managed to maintain customer satisfaction levels commensurate with the sector’s long-term average. This is no small feat, and speaks directly to the market’s culling out of lower-performance players since 2019. Improved balance sheets for surviving drillers have also helped."

In the offshore drilling segment, Houston-based Valaris is this year’s top-rated contractor, moving up from its No. 2 ranking last year. In addition to rating No. 1 in total satisfaction, the company ranked first in job quality, HSE, deepwater wells, Sub-Sahara Africa, Middle East & North Africa, and three additional categories.

Maersk Drilling, which rated No. 1. in 2021, is this year’s runner up. The company captured top marks in the categories of performance and reliability, shelf wells, and harsh environment applications. Rating third overall was Diamond Offshore, which took the top spot in service and professionalism, and in horizontal and directional applications.

Listed alphabetically, other offshore drillers rating first in at least one survey category include: 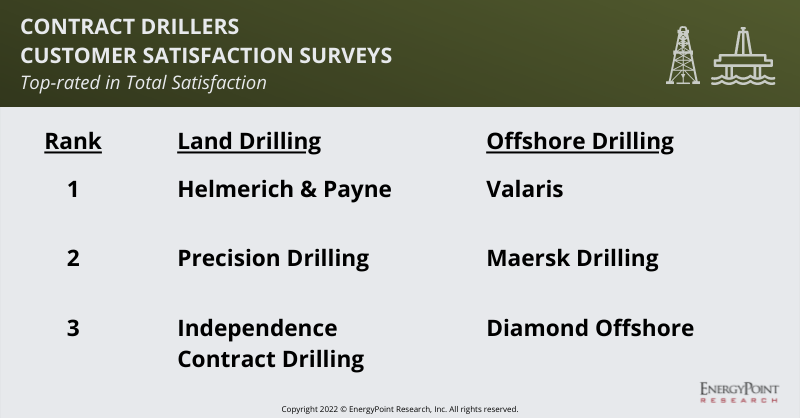 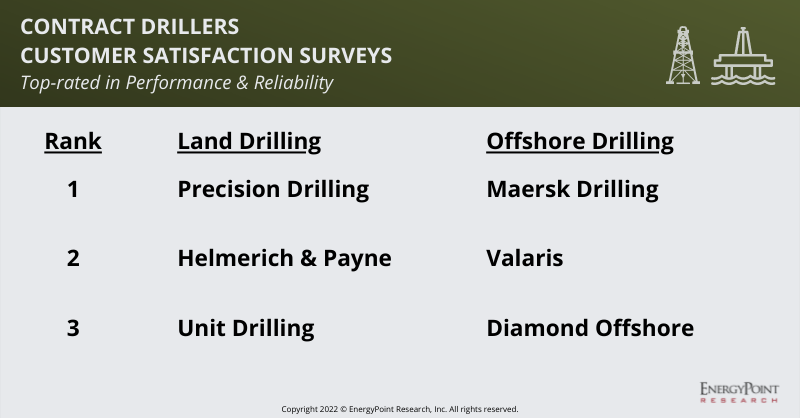 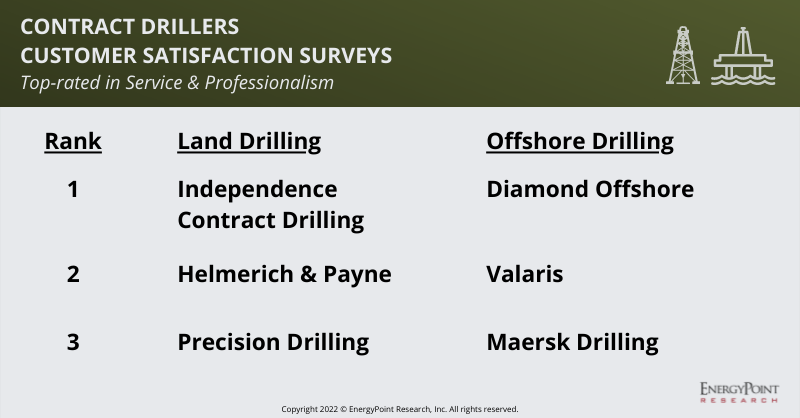 “Despite improving market conditions, the global oilfield—and especially the North American shale patch—has changed significantly since rig counts were last at these levels,” observed Sheridan. “For a combination of reasons, contractors may find it more difficult to capture the kinds of long-term contracts that have in the past provided the visibility needed to invest for the long-term. What hasn’t changed, however, is customer satisfaction’s tie to the ability to garner such long-term contracts.”

Global in nature, this year’s study, which again comprised more than 50 questions, concluded on December 31, 2021. All questions focused on features and attributes shown to drive satisfaction among customers of contract drillers. These include pricing and contract terms, performance and reliability, job quality, technology, service and professionalism, HSE, digital and big data, and corporate capabilities. Contractors were also evaluated across multiple applications, well types and global regions. Survey respondents were asked to rate only contractors with which they have had significant experience as customers within the last 24 months.

This year’s survey results reflect opinions from more than 1,000 customer evaluations concerning major providers of land and offshore contract drilling services. For those categories and companies in which qualifying evaluations exist, scores from EnergyPoint’s 2018 and 2019 studies were included in this year's category‑winner calculations at lesser weightings than 2020 and 2021 studies. In no case were the former period’s results assigned a weighting of more than 20 percent on a combined basis for purposes of calculating this year’s final ratings and rankings.

Full survey results are available in EnergyPoint’s 2022 Ratings & Analysis Reports. These publications include detailed ratings for all rated companies, with analysis of trends and drivers of customer satisfaction as revealed by years of survey data. Inquiries regarding the reports, as well as promotional rights and programs for top-rated companies, should be directed to info@energypointresearch.com or +1.713.529.9450. Information can also be found at the following online locations: