“To some extent, this year’s survey results represent a changing of the guard from prior years, with several companies benefiting from intensified investments in the people, processes and facilities that drive their businesses,” noted Doug Sheridan, Managing Director of EnergyPoint Research. “Whether it’s expanded refueling and payment options, new online applications and technology, or healthier foods and more environmentally minded merchandise, the leading retailers are embracing both the challenge and opportunity presented by today’s changing market.”

Placing third is Sheetz, with operations in the Mid-Atlantic, Midwest and Southeast. La Cross, Wisconsin-based Kwik Trip and Tulsa, Oklahoma-based QuikTrip rank fourth and fifth, respectively, in this year’s study. 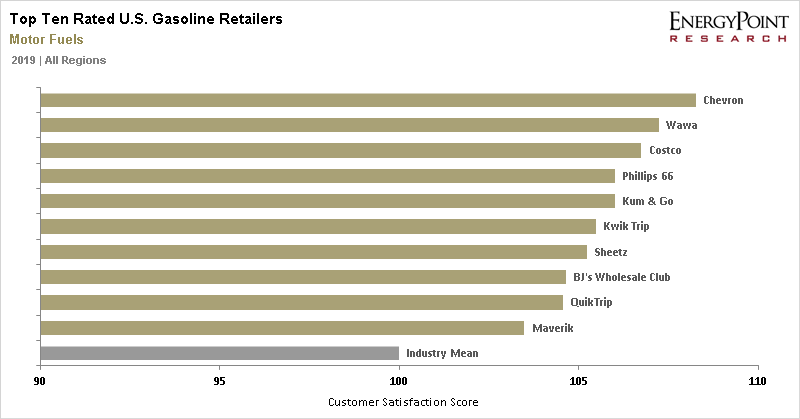 Now in its fourth year, this year’s survey results reflect the evaluations of more than 34,000 individuals between 18 – 75 years of age across the U.S. Lower‑48. A total of 36 retailers received the minimum number of evaluations needed to be included in the final rankings. For those categories and retailers in which qualifying ratings exist, scores from EnergyPoint’s 2016 and 2017 surveys were included in this year's category‑winner calculations at lesser weightings than 2018 and 2019 evaluations. In no case were 2016 and 2017 ratings assigned a weighting of more than 20 percent on a combined basis for purposes of calculating final ratings and rankings.

“Even as the landscape shifts in the consumer economy, customers are maintaining preferences for retailers that possess strong commitments to customer service and satisfaction, along with thoughtful commitments to the environment and healthier living,” added Sheridan. “While retailers must be competitive when it comes to the pricing and selection they offer, it’s high-quality experiences that meet customers’ needs for convenience and quality that continue to produce top-ranked companies in the survey.” 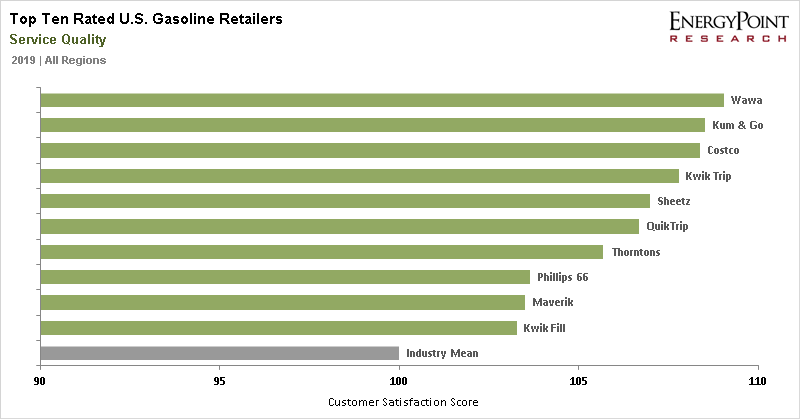 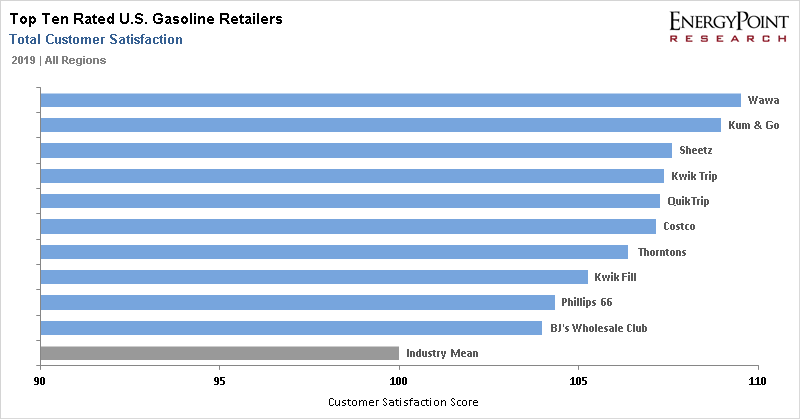 Listed alphabetically, other companies rating first in at least one category in the survey include:

Survey respondents were asked to rate gasoline retailers with which they have had significant experience as a paying customer within the last three months in one of seven selected U.S. regions. The survey, which included more than 30 questions, was conducted in June through August of this year. It focused on features and attributes shown to drive satisfaction among customers of gasoline retailers, including pricing and value, service quality, ease and convenience, motor fuels, food and merchandise, store facilities, loyalty and rewards programs, commercial and fleet programs, and highway and distance travel. U.S. regions covered in the survey include the Mid‑Atlantic, Midwest, Southeast, Southwest, Northeast, Northwest and West.

Full survey results are included in EnergyPoint’s 2019 Gasoline Retailers Ratings & Analysis Report. Report options include detailed ratings from the survey for all 36 companies overall and by region, as well as analysis of overall trends and drivers of customer satisfaction in the gasoline retailing space.

For questions related to the survey or report, contact EnergyPoint at info@energypointresearch.com or at +1.713.529.9450. Information concerning EnergyPoint’s promotional policy and research offerings is below: